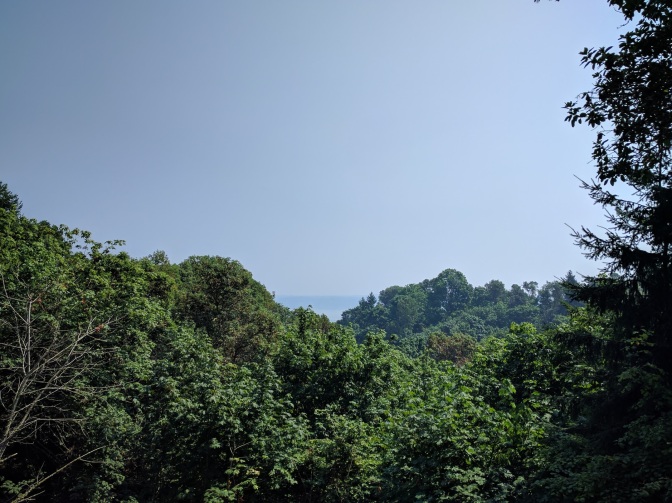 This is the view from the upper deck of my house, across the East Passage looking toward Mount Rainier right now. It’s cleared up considerably, can’t you tell?

In good weather, we’re usually able to look out over the rail and see the volcano some 40-ish miles away. Often, we can even see the Cascade Crest, situated well beyond the volcano, in the blue distance. So, when the air quality is this bad you know something is up.

What is up is a complex of fires burning in British Columbia. The whole area has been socked in since Monday varying amounts of smoke and ash. I’ve had a headache since about then, and my only relief is when that pain becomes punctuated with periodic lung sensitivity and shortness of breath. Who knew a 45-year-old man could develop asthma?

Well, apparently I did. Starting about two years ago I wrote the bones of a story called Fire Weather. It’s a spec-fic piece about an Air Quality Refugee who flees summer fire weather in Chi-town only to become entwined in a pirate fire-fighting effort working off the coast of … wait for it … British Columbia.

It’s got everything too — semi-autonomous wild fire-fighting robots, boats, heroes, anti-heroes, swine, disaster, and rescue — and there’s no reason (other than a keyboard failure) that I can’t find an editor and get this thing out there.

Look for it on Patreon first.