It’s not every day that one get’s to show gratitude for nuts, but today is just such a day.

Over the last two months I’ve been rebuilding the turbo in my 1991 Mitsubishi Delica L300 Star Wagon. My car is just another one of my weirdness markers and often precedes my oddity as I move through the world. I’m convinced that if Wonko the Sane ever drove anything he probably had one of these, too.

Anyway, because it’s so odd, when something breaks down on this beast “fast” and “inexpensive” are never really options. Getting parts from Japan or Korea can take ages and the parts price plus shipping usually blow my budget. And all this was true with the turbo project. As I was putting things back together I realized that most of the remaining hardware I’d removed off the manifolds and et al. turbo assembly was stupid rusty. Rusty as if it had been pulled from an abandoned 1890’s molybdenum mining operation in the San Juans. Seems the original (or replacement, can’t be sure) nuts in particular were *very* prone to corrosion.

Early investigation helped me discover that the price for OEM replacements was going to top $80 clams and could take as much as two months to arrive on my shores (where my shipment would likely languish in customs for a while longer). And that’s for a handful of *nuts*.

Most people wouldn’t get too upset over this, and initially I wasn’t either. That’s because if you know the size and thread pitch of the nut you’re trying to replace it’s pretty easy to pop over to your local auto parts store and find exactly what you need. My problem was that thread pitch wasn’t something I knew nor was it something I could tell by trying to fit old rusty bits back on testing studs to figure out. Consequently, I have a pile of otherwise worthless nuts and washers cluttering up my mechanical works. 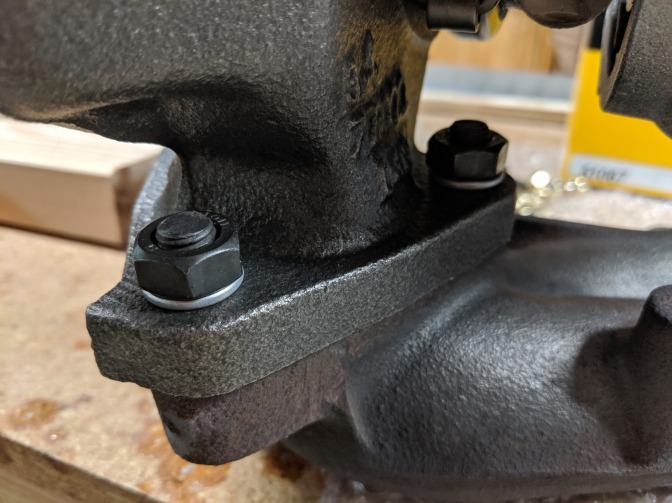 Life lesson I’ve just been reminded of? Yeah, “If you don’t know, ask.” It took a fair amount of asking, but eventually, armed with my trusty phone and the aid of the internet I found the critical answer. Mitsubishi uses M10 and M8 x 1.25 nuts on the exhaust and intake manifolds as well as turbo mounting studs.

Finally, this morning, I stopped in at Vashon Auto (recently renamed Vashon General Store) and David hooked me up with the nuts I need. If I work at it I should be able to turn the van over for the first time in two months this afternoon.