Oh yes, please strip away the mystery. Really enjoyed this article. Plan on reading it again, and then maybe one more time just to make certain the meaning sinks in.

Run a Giveaway – Sullivan gives away advanced reader copies (ARCs) of his books on Goodreads up to 6 months before the book is available in print.  This gives the books more value to contest winners who read them before the general public.  “I was only giving away two copies but 2,700 people entered and I got the member names for all of them,” Sullivan told me.  In addition, each contest entry generated a story on that person’s activity feed on Goodreads, which became free advertising for the book.

Build a List – In Sullivan’s world, building readers can be a one on one chore, but the numbers add up quickly.  “I used to go to malls and stand in a bookstore for an event for three hours and I’d get 5 people to read my book.  But then they’d write back to me and some of them would become fans and recommend my books.”  Goodreads makes the same process much easier.

Participate in The Community – Sullivan stresses a central point about communities – they treat others in the community best.  The secret to being promoted within a community like Goodreads is being a good citizen and participating not just as an author but as a reader.  Sullivan was also one of the first authors to friend virtually every reader who gave his books positive ratings.  As a result he now has over 51,000 reviews of his books on Goodreads. 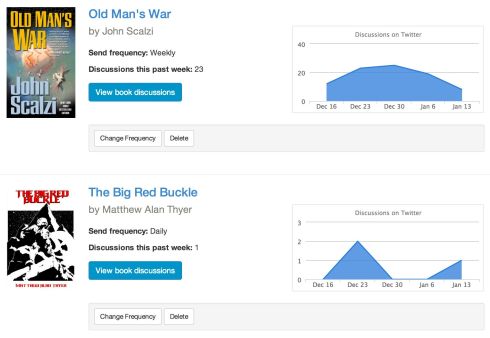 I have no fans

I am waiting on a “webinar” with Hugh Howie to start and browsing through Kboards while simultaneously avoiding the next chapter of “Up Slope” and packing for my trip to ConFusion later this afternoon when I come across a reference to a new site called BookVibe. I know I should be working a little harder than this, and I’ll keep that in mind. I’m just feeling pretty low energy right now.

I searched on my book using BookVibe more out of curiosity than anything else. I like maps and graphs and other information dense displays. I clicked through and realized the the only link to my book in the last week was from a tweet I sent to Vellum to thank them for their amazing utility.

For the sake of comparison I searched on a favorite of mine, John Scalzi’s “Old Man’s World“. His book has been out there for a while and has affected many people. But even seven years after its first publication it’s still getting daily, unsolicited mentions — about 20 per day.

Man, that’s humbling. How do you reach those people? Most of Scalzi’s mentions are from people who just read his book. The picked it up on Amazon or bought a paperback from B&N.